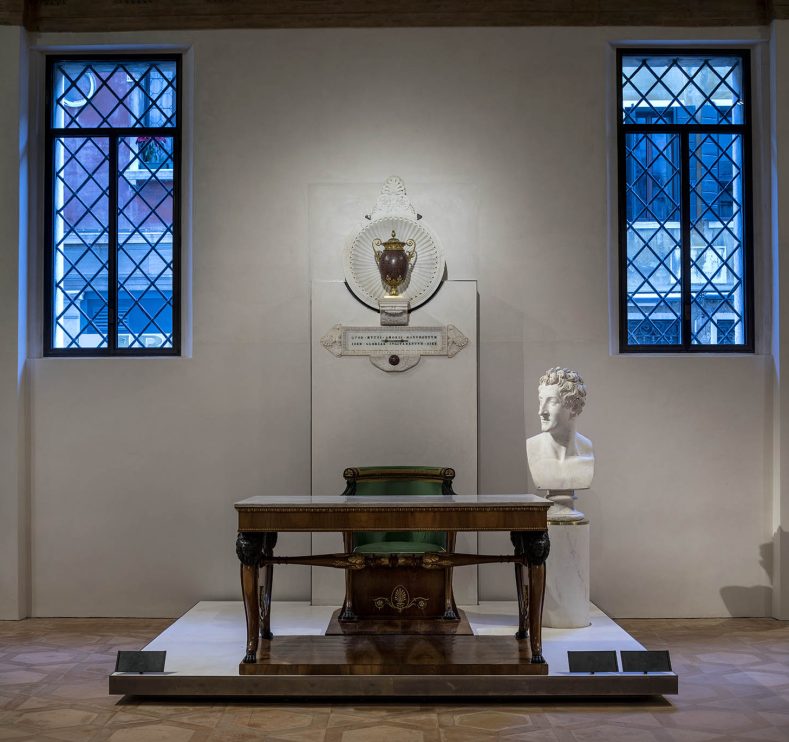 The Accademia’s ‘Cattedra Cicognara’ an Empire style official chair and table are key pieces of Venetian furniture for the history of the Accademia delle Belle Arti and for Venice in the post-Napoleonic era. They were made when Leopoldo Cicognara was its President between 1806-27, in which role he also raised funds from across Europe for the Cenotaph to Antonio Canova in the Basilica of the Frari, a major Venice in Peril Fund project.

The Cattedra Cicognara was designed by Giuseppe Borsato, an academician and professor of ‘ornamento’. It is illustrated as the frontispiece for his book of designs Opera Ornamentale of 1831.

The chair and table had  suffered in storage and were in urgent need of treatment. Work was carried out during 2015 in the Milan studio of restorer Luca Quartana. Both objects required structural repairs, consolidation and conservation of the frames and replacement of missing carved ornament and metal mounts on the chair and table. They are made of walnut with carving and gilt mounts and the table has porphyry inserts at each end. It is now installed in the Tablino, a Palladio interior and the last in the sequence of new rooms in the Accademia, which opened on 30 January 2016.

To find out more go to the Accademia Galleries