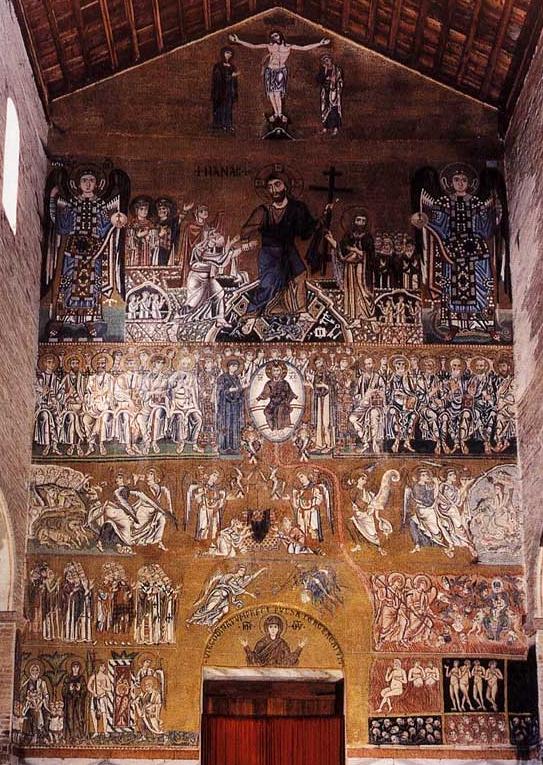 The famous 7th-century cathedral of Torcello in the northern lagoon was in a poor state of repair by 1977. The walls were spongy with damp which had infiltrated the building from the surrounding brackish marshes.There was significant subsidence and the extensive mosaics, dating to the 11th century and possibly the work of craftsmen from Constantinople, were coming loose from the walls.

An international group of experts considered how best to conserve the mosaics and a condition report of the whole structure drawn up. The next phase involved tackling the urgent repairs to the main apse to protect it from humidity, this was followed by repairs to the roofs, gutters and west wall, while a full programme of restoration was planned. By March 1980 the algae were removed from the columns and the fabric project was concluding.

Mosaicists from San Marco worked to conserve the huge mosaic of the Last Judgement on the west wall which was completed in Autumn 1980 and by Autumn 1981 treatment of the mosaics of the apostles, in the more problematic east end which had suffered worse subsidence, was completed.  By August 1983 the golden tesserae in the apse and the Madonna had been treated and with the loan of mosaicists from San Marco and two more from Poland and Jordan the South Chapel was treated in 1984 with works finally completed in 1985.

The Magistrato alle Acque, the authority responsible for the waterways and drainage in the lagoon, undertook state-funded works to protect the Basilica from further infiltration.

In 2002, Venice in Peril and some of the original partners financed scaffolding to enable monitoring of a sample section on the west wall.

This website uses cookies to improve your experience while you navigate through the website. Out of these, the cookies that are categorized as necessary are stored on your browser as they are essential for the working of basic functionalities of the website. We also use third-party cookies that help us analyze and understand how you use this website. These cookies will be stored in your browser only with your consent. You also have the option to opt-out of these cookies. But opting out of some of these cookies may affect your browsing experience.
Necessary Always Enabled

Performance cookies are used to understand and analyze the key performance indexes of the website which helps in delivering a better user experience for the visitors.

Analytical cookies are used to understand how visitors interact with the website. These cookies help provide information on metrics the number of visitors, bounce rate, traffic source, etc.

Advertisement cookies are used to provide visitors with relevant ads and marketing campaigns. These cookies track visitors across websites and collect information to provide customized ads.

Other uncategorized cookies are those that are being analyzed and have not been classified into a category as yet.